Back to Case Studies

The Survey Brief was to undertake a topographical survey of part of a school playground, to locate all traceable underground utilities and to see if any evidence of a previously removed building existed. We undertook a utility mapping survey to PAS128:2014 M1 specification within the blue area below, and PAS128 M4P within the red area where the old building was believed to have been. 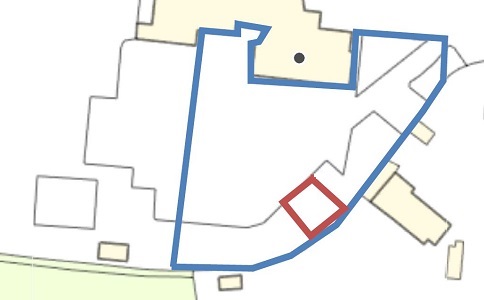 Prior to attending site, a full desktop utility record search was undertaken, which involved contacting all the asset owners to find what they believe to exist within the survey boundary.

Once the topographical survey had been completed, the utility mapping survey was carried out utilising detection techniques including Electromagnetic Location (EML), Ground Penetrating Radar (GPR) and visual inspection.

Initially, PAS 128:2014 M1 Methodology was used across the whole site. M1 methodology is generally used where the density of services is typical of an undeveloped area. EML orthogonal search transects were at ≤10m intervals and when following a utility trace at ≤5m intervals. GPR search resolution was at ≤10m orthogonal transects.

Due to the unknown location of the incoming gas and water mains after the initial survey work, an increase in the search transects to the north east was carried out. The GPR was connected to a Global Positioning System (GPS) and search transects can be seen further below. Several additional targets were located, and these have been shown on the survey drawing as a Radar Trace as we were unable to trace to a point where we could identify the lines.

PAS 128 M4P was specified for an area of the playground where a previously removed building was believed to exist. The Leica DS2000 Ground Penetrating Radar consisting of a single channel emitting dual central frequencies of 250mhz and 700mhz was used in order to detect shallow and deep anomalies. A 0.50m Grid was measured and marked out over the area. All grid scans were successfully collected, and data obtained around the fixed objects.

The GPR data was post processed using GRED HD software to enable the identification and detection of multiple buried services some of which were not discovered during the earlier M1 search phase. No structural elements such as foundations could be identified within the data that would suggest the location of a previous building. The animated image below shows the processed GPR data that has been migrated in order to generate 3D radar tomography that can be viewed at depth slice intervals. The tomography heat maps generated clearly show the location and route of buried services within the site

The final deliverables for this project were:

Please get in touch with Michael Wood, or with Business Development Manager, Rob Hamilton to find out more

Client requirement was for a new heavy vehicle access across the verge of busy main road.